It was another slow month for NFT sales across five of the world’s largest NFT marketplaces by all-time trade volume: OpenSea, Magic Eden, X2Y2, LooksRare and Solanart. Total sales volume across the five marketplaces combined was US$394.02 million, down by over US$100 million or -20% compared to October. November set a new record low for monthly NFT sales volume combined this year.

John Stefanidis, Co-founder and CEO of Balthazar said it’s understandable for NFT sales to have declined this year but more applications for the technology are starting to develop:

“It makes sense for the NFT market to have slowed down this year due to macroeconomic pressures as well as the three cataclysms of 2022: Terra Luna, Three Arrows Capital and FTX. We’ve seen interest rates rise and disposable incomes tighten, volatility in stock markets. People have lost trust and are being more cautious. What we’ve seen is obviously a decline in sales largely for NFT images and art, but what we’re starting to see is really cool and different applications of NFTs. For instance, someone bought a house with NFT technology. So perhaps in 2023, 2024 and onwards, when you buy an NFT it won’t just be buying a piece of digital imagery, you’ll actually buy something bigger that’s attached to that photo. And you can also buy the tokens from the companies that create that technology. So it’s a really exciting, thriving space but understandably, people are waiting for more uses of the technology.” 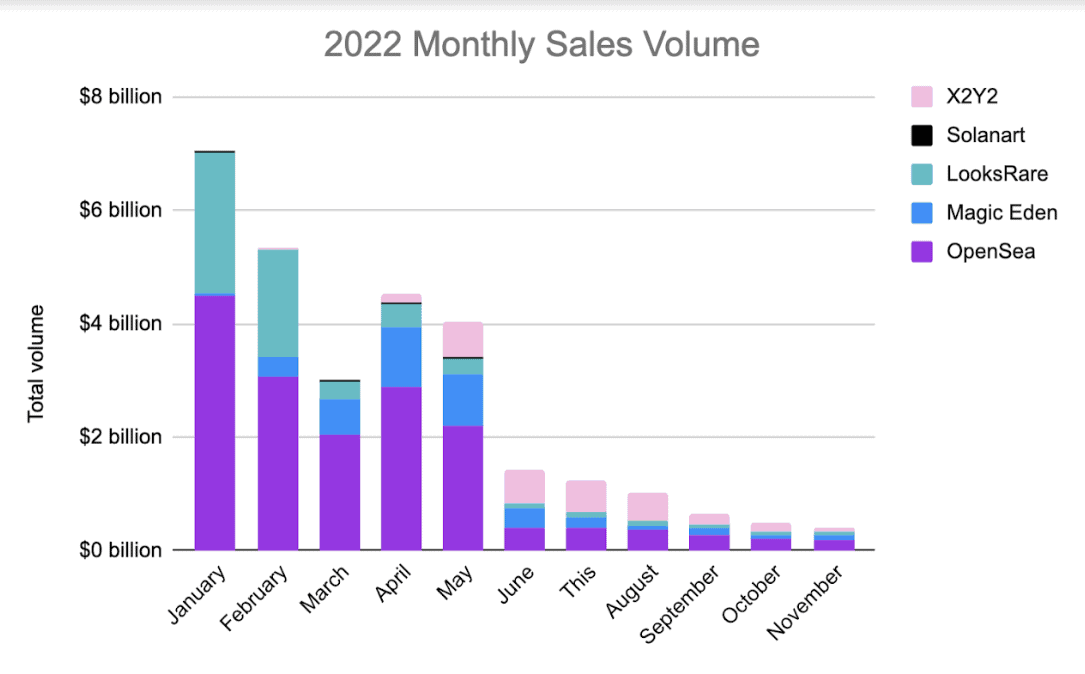 There were 1.32 million users recorded in November across the five marketplaces combined, a drop of 28% compared to October, or 503,522 fewer users. This is the lowest level of users recorded this year. The total number of trades once again increased to the highest level recorded this year. There were 39.7 million trades in November, up by 48% or 12.87 million compared to October.

OpenSea, Magic Eden and LooksRare all saw increases in trades in November, while Solanart and X2Y2 saw a decline in trade numbers. The average trade across the five marketplaces saw an increase of US$68 in November, to US$966 per trade (up 8%).

Two marketplaces increased in their average trade sizes, two decreased while Magic Eden was unchanged. X2Y2 increased by 61% to US$2,026 and Solanart increased by US$21 or 37%. OpenSea dropped by 26% to US$128 per trade and LooksRare was down by 13% to US$404.

Listen wherever you get your podcasts: Spotify, Soundcloud, Amazon, Apple, YouTube and many other popular platforms